In Tennessee last week I met a young global traveler who reminded me of myself in my early 20s when life was an adventure and responsibilities were few.  It was amazing to hear of all of the journeys that he had taken already in only 24 years.  He definitely had me beat at his age.  We had a lot of things in common: he just lost a parent to cancer (I lost my father to cancer when I was 22), he was searching for a direction in life, love and travel, and he was also rediscovering home again after many years of exploring the world.

The conversation lasted for a good couple of hours and the stories resulted in mixed feelings for me of sadness, excitement, and empathy.  At one point I asked the question, “What is your favorite place that you have seen in the world?”  As I began to think what my favorite place might be, it made me think of a different question.  If you could take and show anyone a certain place in the world, where would this be?  This is a very different question but one that has more meaning to me.  Sure, I have been to places that I would consider to be my “favorite places,” but this is very personal.

When I asked him the “favorite place” question, the response I received was not what I expected.  He had done a lot of his traveling on the water, via barges and other ships.  And he ended up in port for a week outside of Bilbao in northern Spain.  But it wasn’t necessarily the city that he described as his favorite place (even though it sounds like a great spot to be and high on my list of destinations), it was a bar called The Hole in the Wall in the port of Castro Urdiales.  He went there every night and the feeling he had there was unlike anything he had ever experienced: a sense of the world wrapped up in one spot.  From people being friendly and interested, to the setting and timing in his life, The Hole in the Wall was more than, well, a hole in the wall. 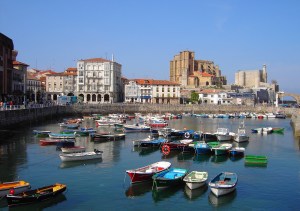 The port with The Hole in the Wall

I found a YouTube video advertisement for the place which seemed rather “sports bar” in a Spanish way:  https://www.youtube.com/watch?v=wDPjE5osQxM

This brings me back to my quandary of what constitutes a “favorite place.”  The history?  The people?  Its setting, be it urban or in nature?  Or the beer?  When I think of some of my “favorite places,” most of them consisted of the location and timing mixed together.  For example, I was in Tikal in Guatemala in 1990 when you could climb to the top of Temple IV and sit there and watch the sun go down over the canopy of the rainforest.  Today you can’t do that; it is forbidden to go all the way up (because it is too dangerous!).  But it is one of my favorite places.  If I were to go back, would the experience be less?

Now that I am planning more itineraries for the travel business, I keep thinking of the other question: “Where would you most want to take people to visit?” And that is a great way to start a conversation–please share your comments and your favorite places or experiences!