A Culinary Insiders Tour to Miami and Key West (Part I)

It was a year ago that I partnered with Dr. John Sconzo to work on creating culinary travel experiences around the globe.  Dr. Sconzo writes a well-followed blog called DocSconz, Musings on Food and Life (http://www.docsconz.com) which covers his food explorations and experiences at different locales, both domestically and internationally.  Our inaugural trip focused on Miami and Key West.  The purpose was to see Miami and Key West in the eyes of some of the best-known chefs working in the area.  We did this by spending time with each of them to get to know their favorite neighborhoods, foods, and visions for Southern Florida cuisine.  Six different chefs helped provide an incredible experience during our five nights in Miami and two nights in Key West.

Accommodations in Miami were at The Angler’s Hotel in South Beach.  The Angler’s Hotel is a Kimpton hotel in the art deco district close to the ocean.  It was a perfect spot to return to after busy days of touring and tasting Miami.  And it didn’t hurt that the beautiful ocean was just a couple of blocks away.

A stroll down South Beach

Since the group arrived throughout the day on Friday, we started the tour on Saturday morning at 10am with a journey to Little Havana.  It is hard to think of a better place to start a tour of Miami than Little Havana.  The Cuban presence is so strong across Miami and influences the food and culture profoundly.

The guest chefs for the day were chef and author Norman Van Aken and chef Jeremiah. Chef Norman Van Aken is a world-renowned chef.  He is considered the “Father of New World Cuisine” and is one of the only chefs to have won the James Beard Award, the Robert Mondavi Award, and the Food Arts Silver Spoon for lifetime achievement.  Chef Jeremiah, also known as Jeremiah Bullfrog, is a celebrity chef and food truck owner based in Miami.  He spent time working at El Bulli in Spain, as well as Noma and others.  Since 2009 he launched gastroPod Miami, the first gourmet street truck in Southern Florida.  It was so great to be with both of these chefs in Little Havana since they knew the history and the best spots to taste.

Our first stop was La Camaronera, an iconic Cuban fish market and restaurant.  Started in 1966 by the Garcia brothers, La Camaronera is known for its Cuban fish-fry and fresh seafood.  The platters started coming out with appetizers including oysters, calamari, and conch.  We next tried a couple of different fish sandwiches with snapper and shrimp.  Entrees of stone crab and yellow tail finished off this first taste of Little Havana.  It was only 11am so we could not fill ourselves up too quickly! 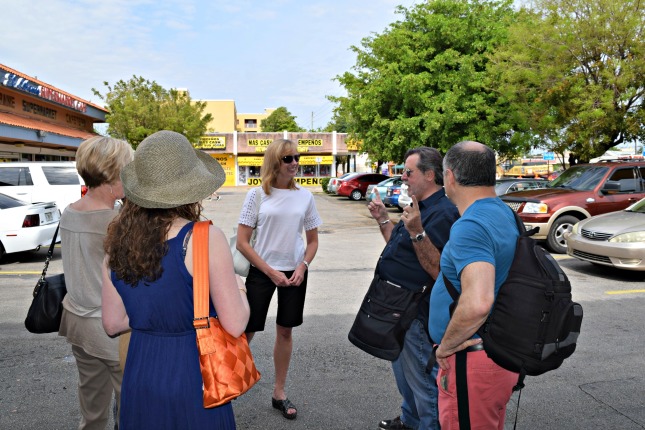 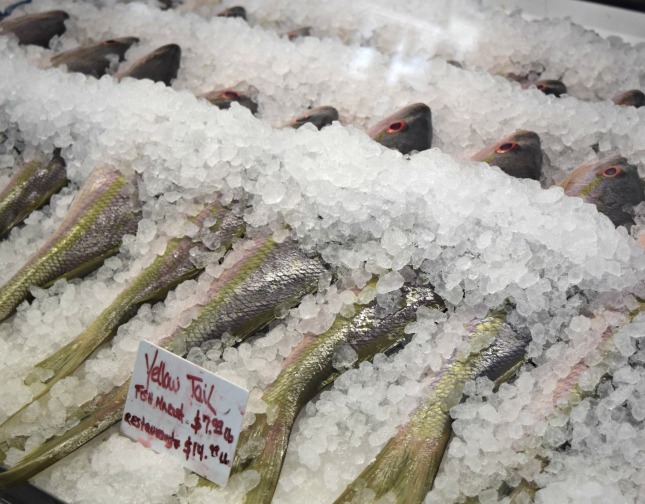 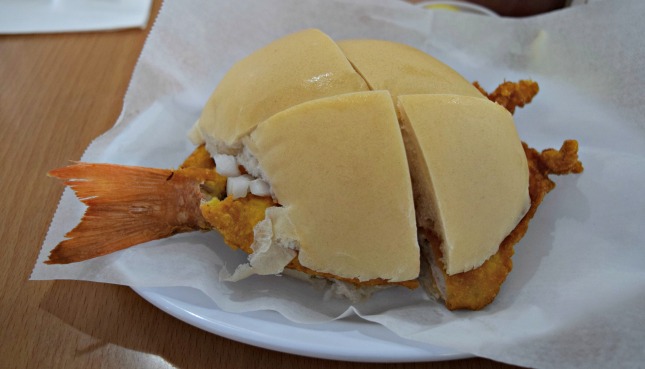 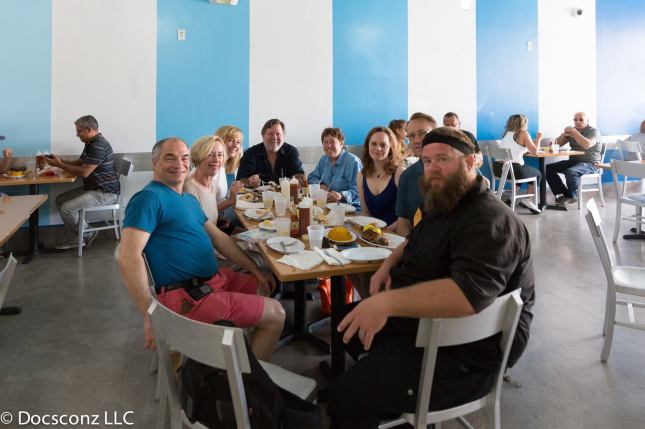 The next stop was Calle Ocho, or the heart of Little Havana.  Here we started by watching the local domino players compete in Domino Park.  The place was packed with both men and women players.  No spitting allowed.  No bad language.  And no firearms…  Interesting rules.  Needing a pick-me-up, we headed down the street to get a cortadito, a classic Cuban coffee that includes some milk.  Served in small cups, it provided a much-needed jolt.  Needing more of a rush, our next stop was Azucar, a Cuban ice cream shop where we sampled a multitude of ice creams including the Abuela Maria, the Cafe Con Leche, the Mulatica (cinnamon oatmeal cookie), and many fruit flavors.  To balance out the coffee and the ice cream it was time for a cocktail!  This seemed to be the answer for balancing throughout the trip..  Next door to Azucar is the world-famous bar and lounge, Ball & Chain.  Since 1935, Ball & Chain has been providing food, drinks and live entertainment in the heart of Little Havana.  Here we listened to some live Cuban jazz and had some mojitos to cool down. 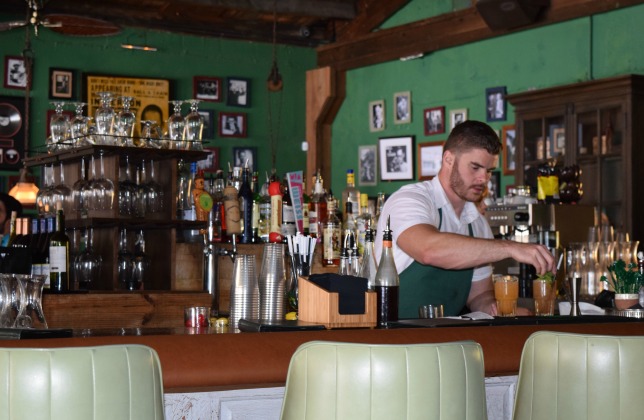 Group having mojitos at Ball & Chain

El Palacio De Los Jugos was our next and last stop on our Little Havana journey for today.  Founded in 1977, El Palacio is an open-air restaurant filled with Cuban food.  There are a variety of meats, seafood, fruits, juices and spices.  The Flagler location is the most famous with musicians playing in the background and entire families enjoying their meals under a large yellow and red awning.  Our group tried some lechon (pig), BBQ chicken, plantains and rice.  It was a great way to end our afternoon in Little Havana with our chef guides. 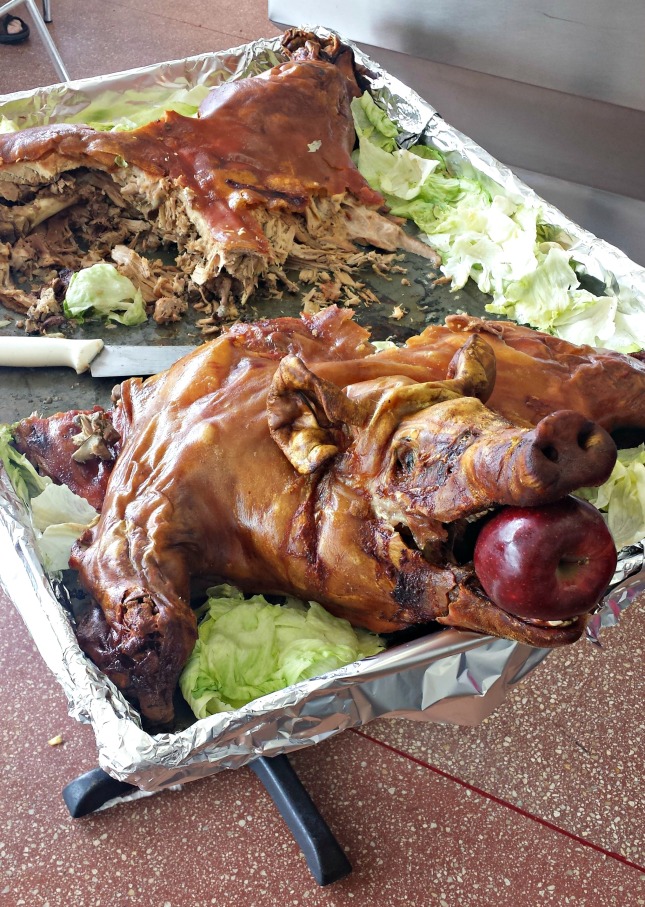 In the evening we had reservations at Alter, chef Brad Kilgore’s fine-dining establishment in the Wynwood neighborhood.  Prior to heading to Wynwood, we ventured to The Broken Shaker at The Freehand Miami for cocktails.  The Broken Shaker is run by Elad Zvi who is becoming the cocktail guru in Miami.  We had a round of cocktails and it was time to head over to Wynwood for dinner at Alter.  Unfortunately, chef Brad Kilgore was under the weather this evening and was not at the restaurant, but we still had a great experience with their 7-course tasting menu.  Highlights were the egg course and the morels.  It was a full day of great tastings throughout Miami and we ended up closing down Alter as the last customers around 12:30am.  What a start to our culinary adventure!

Cocktail at The Broken Shaker

Our Sunday morning started with a trip back to Little Havana to go to El Brazo Fuerte, a Cuban “pastelito” shop and bakery.  “Pastelitos” are baked puff-pastries filled with sweet or savory fillings.   We ordered an assortment for the group including fillings of guava, guava and cream cheese and coconut.  Also ordered were some croquetas of meat and potato filling.  Nothing washes Cuban pastries down better than a cortadito! 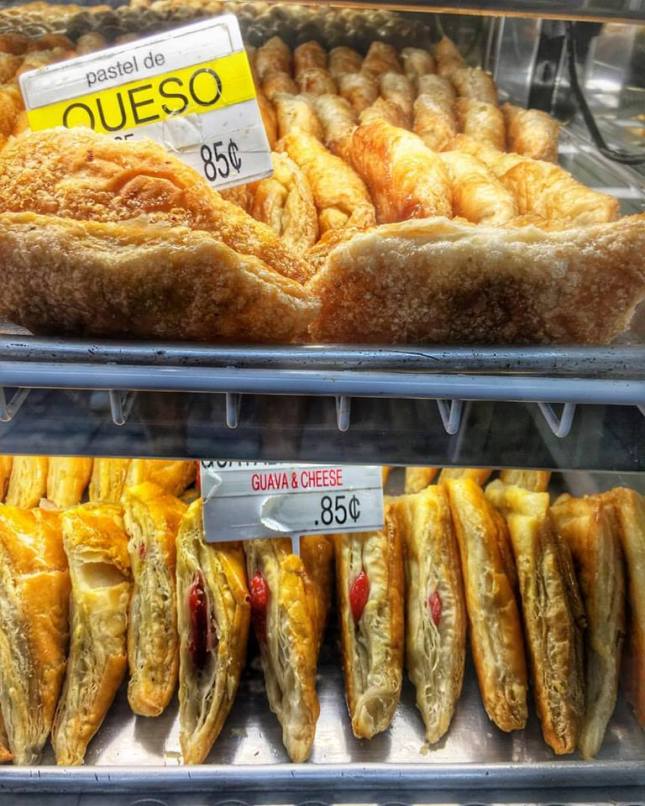 Along the Miami River are some great fish markets and seafood restaurants.  We stopped in both the Casablanca Fish Market and Garcia’s Seafood Market.  Everything was freshly caught and we decided to have lunch at Garcia’s, which happens to be the same Garcia family that owned La Camaronera from Saturday’s Little Havana lunch.  We were treated to an incredible meal at Garcia’s Seafood Grille.  They were so nice to us and sent us a selection of appetizers including a whole octopus, clams and roe.  The smiles on our faces were ear to ear and the taste of the seafood was phenomenal.  We also ordered some colossal stone crab claws and a grilled yellow tail snapper.  I love seafood and I was on Cloud 9!  I do have to say that this was some of the best seafood I have had in my entire life. 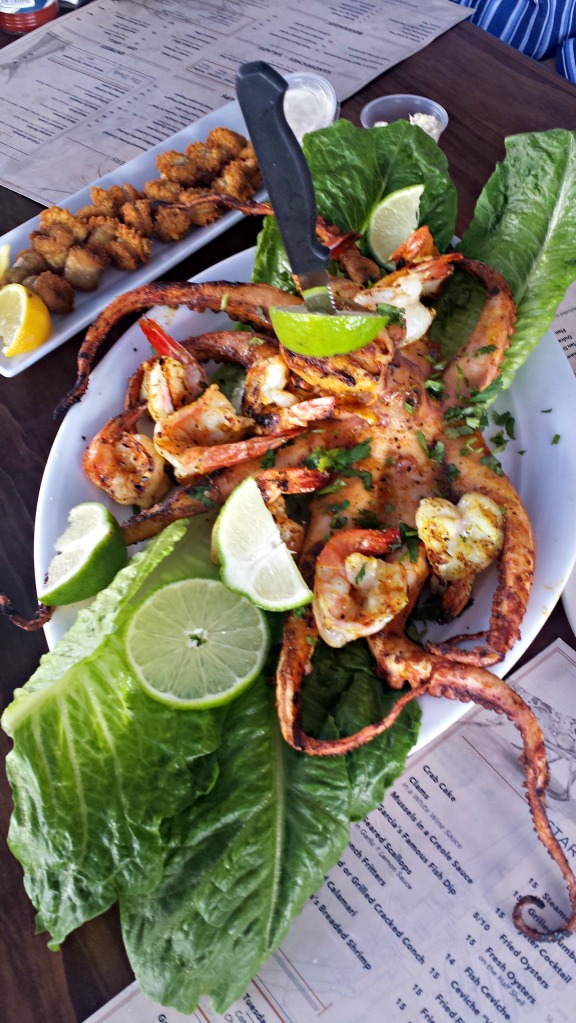 The day could have easily ended there, but not on this culinary insiders tour.  It was time to head to the Vagabond Hotel, a boutique Biscayne Boulevard hotel located in the Upper East Side of Miami.  The Vagabond is actually set in a legendary former motel that dates to 1953.  Here we attended one of their weekend BBQ series that includes well-known chefs from Miami.  The chefs for this Sunday’s event were chef Phuket Thongsodchaveondee of Cake Thai and chef Alex Chang of the Vagabond Hotel.  They created a thai-inspired BBQ lunch that included fish, chicken and other nicely-spiced treats.  It was a great “party” atmosphere at Vagabond pool where guests sat out on lounges and a DJ was spinning the tunes.  That was lunch #2.

DJ spinning at the pool

The BBQ party was just starting at the bar

Exercise is important on a trip like this so we went to Wynwood to check out the street art and walk around.  Wynwood is home to over 70 galleries, museums and collections.  It is also filled with incredible street art from artists around the globe.  It is one of the largest and most prominent creative communities in the US.  We spent about two hours walking around the district and the Wynwood Walls.  We also stopped for a coffee at Panther coffee in Wynwood that specializes in small-batch roasting.  It was packed on this Sunday afternoon.  Lots of iced coffees… 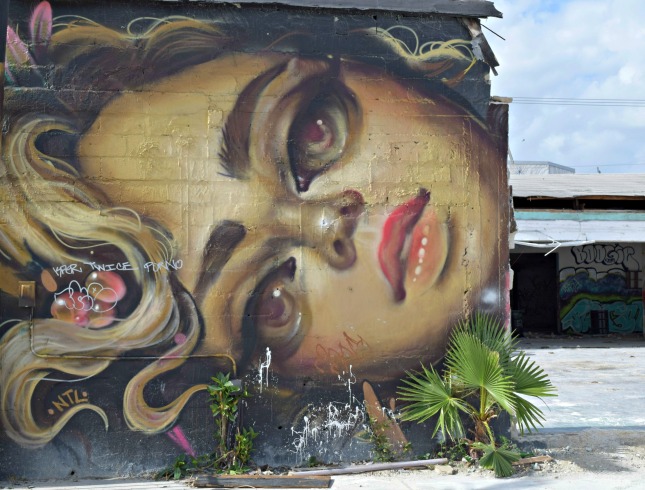 So fun to explore all of the street art 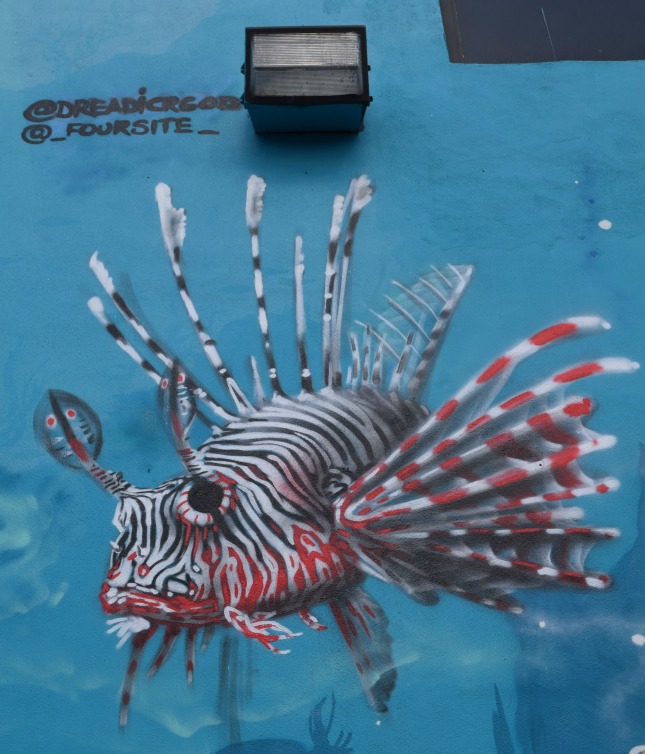 Inside the Wynwood Walls 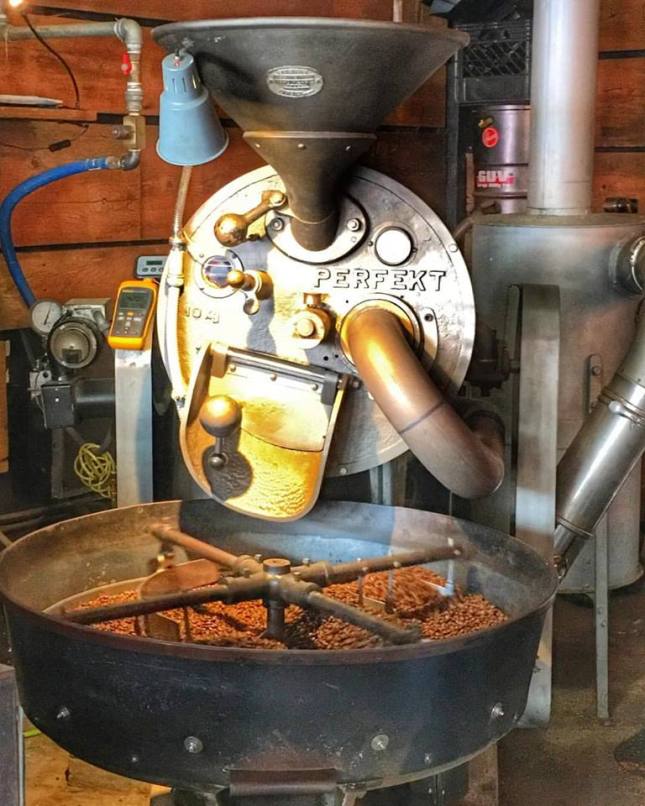 Dinner happened to be in Wynwood as well, so we ended up staying in the district.  This allowed some time to relax and digest for our next meal at gastroPod.  Chef Jeremiah Bullfrog went out of his way to prepare a special private dinner at his gourmet food truck location and property in the heart of Wynwood.  We were joined by some other friends of chef Jeremiah and food experts.  The dinner was a nice mix of cocktails and appetizers that we had while standing watching the kitchen perform inside the truck and this was followed by more entrees served to us at tables outside on the property.  Chef Jeremiah was such a wonderful host and it was great to spend both Saturday and Sunday with him.  The food was delicious and the setting perfect.  It was a great way to end another day of culinary tastings. 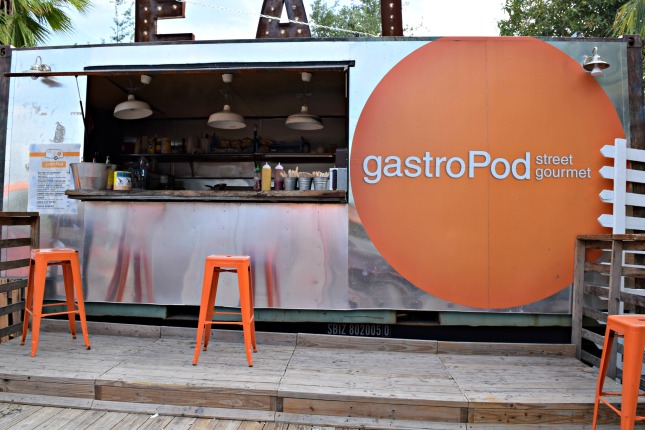 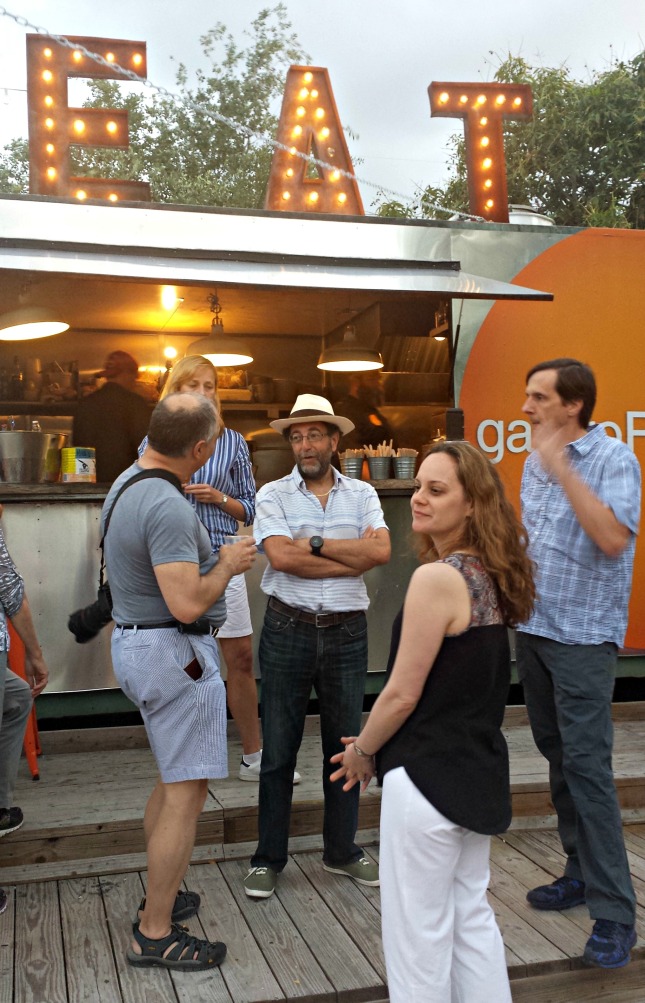 Cocktails and chatting before dining 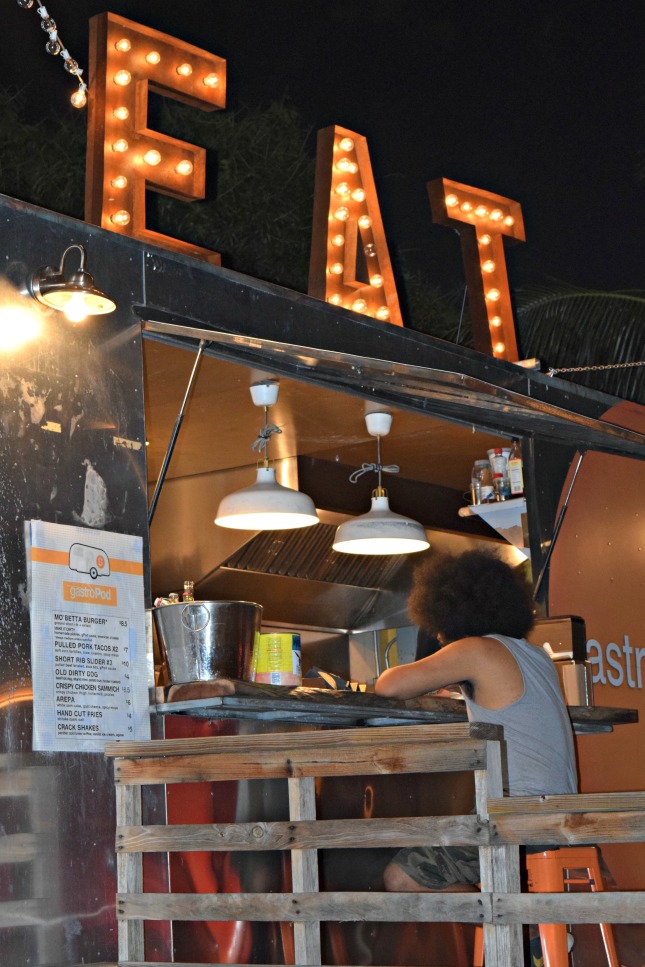 The DJ taking a break to eat 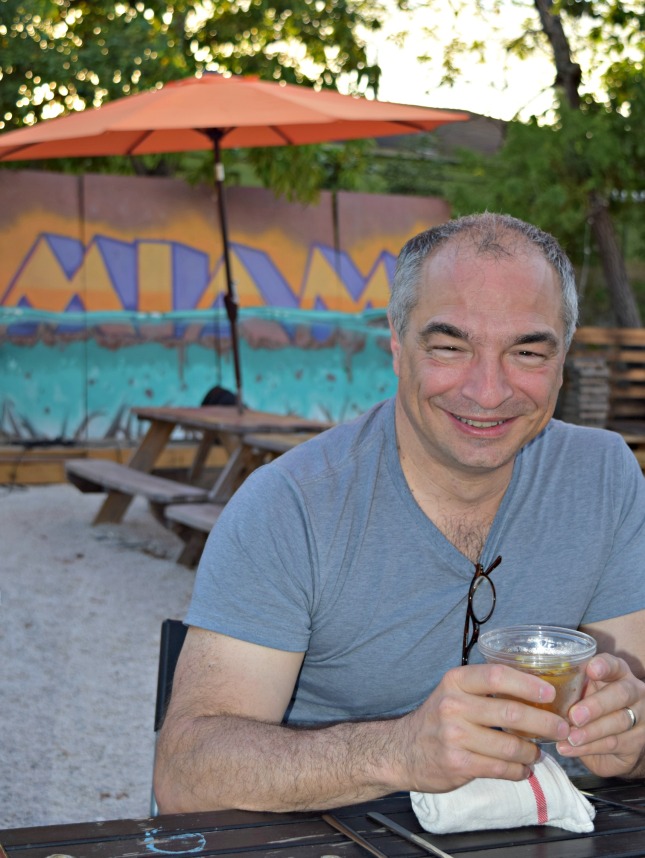 This is the end of Part I.  Part II coming soon.